You are here: Home / Sint Maarten

St. Maarten is a constituent country of the Kingdom of the Netherlands and encompasses the southern 40% of the divided island of Saint Martin, while the northern 60% of the island constitutes the French overseas department St. Martin.

The center of the island (across which the political boundary runs) is composed of a mountainous spine rising to 425 m. The coastal areas are a mixture of flat lands and low hills punctuated by numerous ponds, primarily of high salinity. Simpson Bay Lagoon, one of the largest lagoons in the Lesser Antilles, is a dominant feature of the island and a major yachting center. The terrestrial vegetation is thorny woodland, dominated by scrub in the lowlands and low forest in the mountains (with small patches of the original semi-evergreen forest on the highest ridges).

Of the 164 bird species recorded from St Maarten, 39 species are resident (and breed) on the island, although the majority of species are Neotropical migrants (or vagrants). Five (of the 38) Lesser Antilles restricted-range birds occur in St Maarten, none of which is endemic to the country. They include Green-throated Carib (Eulampis holosericeus), Antillean Crested Hummingbird (Orthorhyncus cristatus), Caribbean Elaenia (Elaenia martinica), Pearly-eyed Thrasher (Margarops fuscatus), Lesser Antillean Bullfinch (Loxigilla noctis).

The country is important for waterbirds (in spite of the severe alteration and destruction of wetland habitats), with 50 species recorded (18 of which breed). This is partly due to the presence of two low-salinity ponds which are unique within the region. 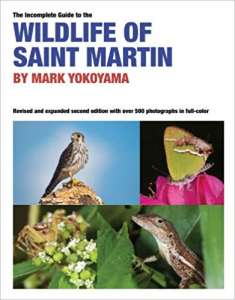